The Shawano Optimist Club recently held its 45th annual installation and awards ceremony, during which officers and directors for the coming year were installed and special awards presented.

Following the installation, Goodchild announced that the theme for the coming year is: “Optimism…pass it on.” She added that members should enjoy their year, have fun, and always follow the Optimist creed. 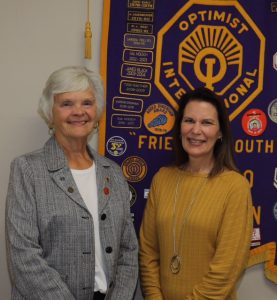 The Shawano Optimists annually name an Optimist of the Year. In presenting the award to this year’s recipient Gail Moesch, Greg Parker said, “Gail has always been dedicated to keeping accurate records and this year, presented two new activities that turned out to be very successful. One was a three-on-three soccer tournament and the other was a fund raiser in which people could purchase game cards that gave them a chance to win cash depending on the scores of each week’s NFL games.

The club also presents a member with a life membership in Optimist International. In presenting the award, Dan Mauel said, “This year’s recipient, Jen Schroeder, exudes optimism and our mission of serving our community’s youth.”

The Shawano Optimist Club has been serving the Shawano area since 1976. Annual youth projects include a bike rodeo, Christmas movies for kids, Respect for Law activities, boys’ and girls’ basketball tournaments, a Rose Day fund raiser, a Scholastic Awards Banquet, as well as basketball and football skills competitions. The funds the Shawano Optimists raise each year are all returned to the Shawano community to support youth activities and more than 30 different organizations.

Receiving the Shawano Optimist Club’s top awards for the 2020-2021 Optimist Year were, at left, Gail Moesch, who was named Optimist of the Year, and Jen Schroeder, who received a life membership in Optimist International.